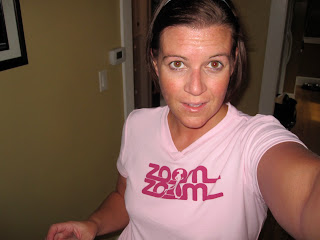 If only in an effort to get my sportsbra photos knocked down from the top billing, I went for a run today.  I am still not feeling well at all, but after spending most of the past four days in rest on the couch, I was starting to go insane. So I popped a couple of Dayquil, ate a Lean Cusine and drank a ton of fluids, then hit the road after I digested. That's me above, post-run, glistening the rest of my fever out of my system.

I was supposed to run 10 miles this weekend, but in my current state managed only 2.  I am making myself feel better with the fact that next Saturday was supposed to be a shorter "long" run at only 6 miles, when in fact, I have a half marathon that day, so I will at least even out my miles over the week.

The good parts are that Denver has absolutely perfect running weather today.  Overcast, 65 degrees and breezy, and the leaves in my neighborhood are gorgeous right now.  In addition, my new running shoes feel awesome.  The negative?  My throat and lungs were burning like hell the entire time.  I knew better than to push it any further. Mike just took off for 7 miles, and I'm feeling a little jealous of his health.

Yesterday's menu, while not ideal, was probably within my 1600 limit.  I ate two eggs and two pieces of whole wheat toast for breakfast, skipped lunch (while I almost never skip meals, not feeling well has left me without much of an appetite.  I'm not going to fight that) Then last night, we went to dinner and a soccer game with our good friends, Brenda and Brant.  We had Mexican.  I went for the fish tacos on corn tortillas, and while the usual suspects were there: refried beans and spanish rice, the portions were actually pretty reasonable. Add a Coors Light and a half to that, for what I estimate to be around 750-800 calories.  Then add to that, a decadent post-game trip to this new place in Denver called D-Bar Desserts.  (amazing desserts, super fun, cool menu, horrible service). I ordered what was called the Cake and Shake, which was a big piece of chocolate cake with a sidecar mini vanilla milkshake.  I ate less than half of my cake, drank the entire mini milkshake, and had coffee.  I estimate that whole ordeal at 600 calories, potentially slightly more.  So, all in all, with eating out and doing dessert I still was only over my daily dose of calories by a hundred or so. It was a fun night, and it felt so good to be out of sick bay that I felt ok about it.

Highlights from today's playlist, (songs that made me faster or happier while I ran today) instrumental version:
Rebel Rouser by Duane Eddy
Cliffs of Dover by Erik Johnson
Posted by Cara at 1:36 PM