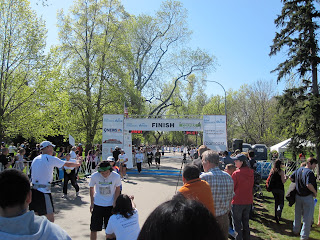 After taking the advice of my esteemed readers and race colleagues, I decided that, although it was tempting, I would not forego the Colfax Half Marathon due to sickness and injury and would instead show up with a plan to walk a lot and continue letting myself recover.  It was a long morning, but I did cross the finish line, albeit very slowly.  In honor of my favorite sportswriter, Bill Simmons, I have elected to do a running diary of my day at the Colfax Half Marathon.  If you can't make your goal, you can at least make some fun.

The following contains graphic information about phlegm and muscle fatigue and may not be appropriate for all audiences.

4:20am:  I get out of bed, thankful that I had the self awareness to remember to turn on the auto feature on the coffee maker the night before.  The smell of coffee is somewhat soothing at this hour.  I have a giant cup (with sugar, instead of my usual half and half), 32 ounces of water, and eat two pieces of Udi's gluten-free bread with a piece of cheese, and then take a shower.

4:50am: I am showered, brushed, and coated in Body Glide.  My thighs would easily start a fire without that stuff, and it has saved me from many painful chafing and blister situations.  Our littlest dog wakes up and wanders out to the living room.  She looks at me, incredulous.  "This is Saturday, lady", she says with her big brown eyes.  "Why in the hell are you awake?"

5:15am: I dress in my new Athleta running skirt (not as good as SkirtSports, but they come in tall sizes, which the side of me who does not wish to show her butt in public was desperate for) and my Girls on the Run Sole Mates team shirt.  Gotta dress the part, even though I already know I am going to be so slow today.  I look in the mirror and look like a runner to myself. That's something.  I'll take it.

6:00am I make the two minute drive to the edge of Park Hill and leave my car on the last block before City Park.  I cross the blocked-off and empty Colorado Blvd. and make my quiet pre-dawn walk to the starting line.  Racers are warming up and wandering around, but as always, there is little talking.  People are focused and intent on the race ahead.  As I walk down the winding City Park lane towards the Pavilion, I hear a haunting noise.  I realize that the fence to my right is the back property line of the zoo.  I look up to see two white wolves perched at the top of the mountain-like structure in their enclosure staring down at the runners and howling as the sun starts to rise.  I file this memory among the coolest things I have ever seen.

6:15am:
I take about three bites of a Lara Bar and eat a package of Luna Moons.  I am fueled, but definitely not feeling ready.  The past weeks of being sick and injured are coming to mind and I start to feel an uneasiness.  I walk toward the corrals and stand in the eleven-minute mile group.  Pride or hope or plain wishful thinking keeps me from labeling myself as a walker, even though I know that I will be today.  I put on my headphones to block out the typical pre-race jokes coming from the MC ("Put your timing chip on your fastest foot", etc)  As if to remind me of how things are going to go down today, I begin coughing uncontrollably, the remnants of three weeks with an upper-respiratory infection combined with a brisk walk in the cold air.  The tail-end of a month without running a step.  This could be a mess.

6:45am: The announcer yells go, and the runners begin the shuffle-jog-shuffle of getting across the starting line.  I am jogging.  Then running.  I feel a little shaky, but it feels so good to run for the first time in what seems like forever.  I run the first two miles, through the park, down to Colfax, and across Colorado Blvd.

7:10am:  I stop to walk and give myself a little breather.  At this point, I cough up and spit out something that does not seem human.  The woman behind me says"Ohmigawd!" and runs past me with a look of disdain.  I look down and think, my body must have been dying to get rid of that for the past few weeks.  This will not be the last giant phlegmball of the day.  I feel that I should contact buyers of Mucinex everywhere.  If you want to get it all out, save your $12 and run a couple miles.  Done and done.  If anything is accomplished today, it is finally clearing my sad little lungs of all the crap they have been carrying around for the past month.

7:50am: I hit the mile 6 marker and the third water stop.  This is actually a really good race pace for me.  I am starting to feel cocky, like I am going to finish, finally make my goal time, and prove a whole bunch of stuff to myself today.  I look up Colfax Avenue, and think, bring it on.  Colfax Avenue responds in kind. Somewhere during the next mile, it all comes falling apart.  Who was I kidding?

8:10am:  My breathing is ragged and labored and I have to stop and walk.  As my muscles slow down from running pace, the twitching and tightening and spasming begin. My lower back and messed-up butt muscles are in traction.  My knees begin to swell, and my hamstrings feel like you could draw a bow across them to hit a high note.  The hot messiness has commenced, and I am quite suddenly in pain.  Time to slow down, but the slower I go, the stiffer I get.  This last half of the race is going to take forever.

8:45am: After the turnaround at University Hospital, I am, quite simply, pissed off.  I manage a hobbling jog for about three blocks and then have to walk.  I do this over and over again until there is more hobbling than jogging.  I am beginning to get passed by the people who have been walking since the start, the ones who have maintained their paces, the tortoises to my hare.  I hear the voice in my head say, "I told you. I told you you should have just walked"

9:15am: At mile 10, I see it.  There is a giant, stained glass hummingbird on a stake in a front yard.  Whenever I see a hummingbird, it is the secret sign to me that my mother is there. I don't even believe in such things, so that is why it's a secret.  This hummingbird is there for a reason.  I am going to start running and finish and do whatever it is I am supposed to be doing since starting this whole thing.  But instead of buckling down and forcing my body through the pain, I start to cry.  Running and crying at the same time are doing nothing for my breathing, and I am back to hobbling before I know it.  That is why I only secretly believe in signs.  Because sometimes they can screw you, and because sometimes you have to quit being a baby and do things for yourself. Other times though, they can soothe like nothing else.


10:00am: I am getting close now.  So close, that I see my own street, Grape, just a couple blocks in front of me.  If I take a sharp right at Grape and go a couple more blocks, I can climb into my bed and pretend this day never happened.  Just a few blocks up the street.  I have never once in all my bad races, (and there have been more than a few) felt the urge to quit.  I've definitely begged for it to be over, or wished that the torture would end, but I have never been tempted to quit until today.  As I approached Grape Street, another hobbler comes up behind me, her short-legged hobble-jog, matching my long-legged hobble walk.  "We're almost done," she says and smiles.
As the underdog in sports my entire life, I have had many people give me wise words of encouragement, well-thought out prose designed to make people like me feel better about their unathletic lots in life.  Most of the time, I've said thanks, and rolled my eyes behind their backs.  What could hard-bodied people like that possibly know about having the deep-seeded desire, no craving, to win at sports, but never have been given the stamina or hand-eye coordination, or drive? You know, besides possibly EVERYTHING?   This girl said nothing of importance, but for some reason her smile and understanding made me realize that we were going to finish this race.  She and I, her on her short legs, me on my long ones, both of our above-average sized booties bouncing casually behind us, we were going to finish.  And we did.  20 minutes later. Right after we got passed by a woman pushing her oxygen tank on a cart.  (Mike would later jokingly tell me that it's cheating to run with an oxygen tank, but I know that this lady had her own set of demons she was conquering)

10:20am: I ran into Mike at the home stretch.  He talked me through the last half mile, and I started my broken, swollen jog again.  The 12.9 mile mark coincided with the 26 mile marker for the marathoners, who had started 45 minutes before the half marathoners.  As was to be expected, they were finishing right next to me.  Part of me felt so stupid about that, but the part of me who wanted to stay home to start with felt ok with it.  It was over, and I had brokenly conquered 13.1 miles before the rest of the world had even decided what to have for breakfast. Sometimes, that is all you can ask for.


While there will always be those athletes and runners who can just get out there and finish a distance run in impressive amounts of time, for most people, these races take training.  Consistent training that builds gradually and teaches muscle memory and stamina.  I will probably never do again what I did yesterday.  It hurt worse than anything else I have ever done.  However, that being said, it was really good for me to get out there and see why the training is so important.  While I have not yet reached my goal for time, I have never been in pain after a race like that.  Even after the hills in San Francisco.  It isn't nice to do that to your body.  My next half marathon is in Colorado Springs in July.  I am re-starting my training regimen at the beginning this week to let my body heal, and I will be sticking to it religiously for all of my races for the rest of the year.  Phlegmballs be damned.