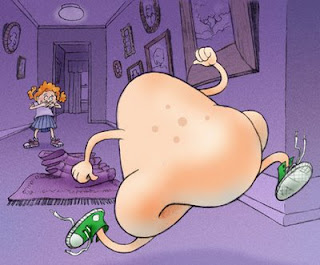 Hopefully my nose will be up for running a 30-minute 5k on Sunday
I got the dreaded cold that has been going around and have not run since Monday.  I have been kind of down lately, but I refuse to let this take me down another notch.  I have a race Sunday, and so right now, I am pounding vitamins and diet 7-up and just gearing up to make a decent showing at this 5k. There are going to be setbacks along this road, and so I refuse to give into them.

After two weeks of not paying real attention to my nutrition plan, my weight is the same.  So, minor harm and foul.  A few days lost, but many more to go, and I am actually feeling really good, subtract of course the runny nose, sore throat, and man voice.  I have made the decision to go off of gluten completely for awhile and see if it improves my breathing.  I have heard from several of my hard-core running friends that this minor diet adjustment changed their lives and made them better runners because of the way it opens up their lungs and airways.  I'm game to try it.  At its most basic, this will simply mean cutting out bread and pasta in favor of rice, barley, potatoes and other non-wheat grains and carbs.  I even picked up a gluten free bread mix at the store and am going to make it this afternoon.  The worst part of it is cutting out beer.  I do love beer, but I really don't need it, and the empty calories plus the giant helping of gluten in each beer just isn't worth it.  I started yesterday and am and trying it for three weeks.  This takes me into my annual Girls' Ski Trip, which is a giant beer and carb fest.  I will see how I feel by then.

Anyway, just a short, boring update for today.  I will give a race update on Sunday afternoon.  Hope I don't sneeze and cough all over the other runners.  They tend to frown on that.
Posted by Cara at 7:42 AM