Weigh In and Coming Out of the CRAZINESS 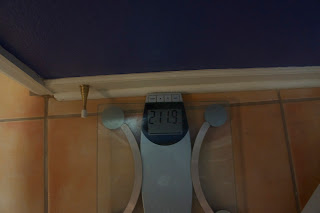 Work, as I mentioned last week, has been insane, but is finally calming down.  I have been SO sick.  Everyone at my work has been sick for weeks with bronchitis, most people for 6 and 8 weeks!  I am assuming that is what I've had, too.  My symptoms have been the same as everyone else's, but I was reluctant to go the doctor because the last time I went, she said I was running too much and was run-down.  And she's a runner!  I get so frustrated with that, because when I was heavy, she would tell me that I needed to lose weight, and now that I have, she frequently tells me that I am run down and need to take it easy, which to me translates into gaining weight.  So, I didn't go to the doctor.  But I have been taking it easy.  I ran just under 4 miles this week in two different sessions and felt pretty decent after both times.  I have a 30-minute personal training session tomorrow (it came free when I switched gyms) and will try to do a 3-miler on Thursday.  I am supposed to do 8 miles on Saturday, but am going to do a 10k instead, and bump up to 8 for next week.

I don't know what the right answer is.  Some people run through their sicknesses and always do fine, some insist on resting the whole time.  I am doing a mix of both, I guess.  I am just so frustrated with how many times I have been sick this year!  I never used to get sick, and now, I consider myself healthier than I have ever been, and I have been really sick several times!  What gives already?  Anyway, chin up, soldier.  Keep calm and carry on.

I weighed in this morning.  Down .6.  That seems to be my usual number.  Feels like it should be more, but I have learned to be happy about any loss.  So yay,  211.9. But if I want those jeans anytime in the near future, I better pick it up, right?  I took the picture of the scale, but had to step off first, that's why there are no toes.  I got a new, fancy camera for Christmas, and when I hold it on the scale, it bumps my weight up by half a pound (can't have that!), and my husband took our point-and-shoot to Europe.  So, anyway, there it is.  Still heading down!

Anyway, life is back to normal unless you count this ridiculous cold weather.  It was minus twelve today.  The high was supposed to be negative 1, but I don't think it ever got up that high.  I just took the recycling out and was instantly frozen.  Yikes.  Thank goodness for indoor tracks.  More this week!!
Posted by Cara at 5:07 PM