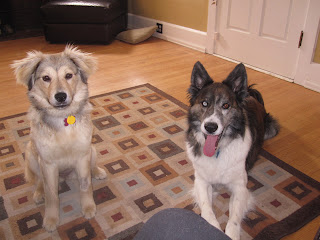 This is Blue and Bex.  Blue, on the right, has been my dog for almost 8 years, since he was a baby and since he and I lived alone together in a little apartment.  He was my family before I ever met my husband, and now he is a best friend to both of us. He is smart as a whip and dignified and almost always well-behaved. His counterpart, Bex, is a new addition, adopted in January at about 5 months old. We call her the cheerleader because she is adorable and chipper, a little ball of energy, but not exactly the sharpest tool in the shed (no offense to any cheerleaders out there). She cracks us up every single day with her horrible antics. They get along great.  Bex keeps Blue young and active, and Blue makes a vain attempt to teach her how to be a good dog.  I love them both so much, which is why I feel like the worst person in the world for neglecting them in favor of training.

Neither of them are really down with running.  Blue used to be a great running buddy, but as he has gotten older, two miles is about his limit. Bex is ridiculous and has a hard time keeping her ADHD in check long enough to run in a straight line for more than a block or so.  I have tripped over her enough times to learn my lesson.  Taking both of them running together is just asking for my face to meet the sidewalk at some point. (calling Cesar Milan!)

It was one of the most gorgeous days of the year today, yet I spent my run inside on a treadmill.  My plan was to rush home, walk the dogs for 30 minutes, bring them back and then run 4 miles.  On the way home, I started thinking about how I needed to run to the store, and then how it would be getting dark by the time I got home. Then I realized, if I walked the dogs first, I would be running in the dark alone, which I basically refuse to do. In addition, I can't go home, see them for a minute and then go running up the road without them.  The look they give me when I do that is heartbreaking.  So in a moment of panic, thinking I wouldn't get my workout in, I took a sharp right and drove to the gym instead, banged out my run on the treadmill (my friend, Brenda calls it the dreadmill, and I agree), headed to the store, got home, put away groceries, and looked outside into the dark.  By then, my husband was pulling up, and we needed to cook dinner so we could eat and both get back to some work (we are both buried right now) Now I am sitting here at 8:30 and my dogs didn't get a walk today, and I can barely keep my eyes open.

Blue and Bex have a dog door so they can get outside, but they were basically alone for 11 hours today, and then didn't get the good exercise they deserve and need. They did, however, each get a new toy and new bone from the grocery store because of my dog guilt. How do people train when they have kids?!  I can't even manage to raise my dogs the right way.  GUILT!

Mike and I made a deal that we would get up an hour early to walk the dogs tomorrow.  I am writing that here to hold myself accountable because we are notorious for making plans to work out or walk the dogs before work, while the only thing that ever gets a workout is the snooze button.  I figure if I have to tell you all about it tomorrow, I will actually get up.  Only YOU can prevent my dog guilt.

The answer to my dilemma, I know, is to get out of my bed at 5AM and run, even on the treadmill if need be, so that my evenings can be dedicated to the rest of my life.  I have never been able to stick to the morning routine though, and I have tried so many times.  How do you morning worker-outers manage to do it? Any secrets?  Or are you all just cheerful morning people instead of lazy, bitter pillow-Scrooges like me?  Help!

Hit calorie target today. (yay, two in a row!) Laughed when I hopped on the scale this morning and it was 3.5 pounds less than yesterday.  I KNEW I was retaining water! Oh well, as sad as it was to have to post that number yesterday, I am going to have a great number in two weeks.  We made a great dinner from Cooking Light; LOVE that magazine and website!  Today's run was a little painful following the half marathon, but I pushed through, walking for one minute to every five minutes of running to keep my piriformis from acting up.
Posted by Cara at 8:03 PM